1. Preheat oven to 150°C (fan-forced). Place the egg whites in the bowl of an electric mixer and beat until soft peaks form. Add in caster sugar a tablespoon at a time, beating well until the mixture is glossy and at stiff peaks. Sprinkle the cornflour over, add the vinegar and mix for a further minute.

2. Carefully place mixture onto an 18cm-round on a baking tray lined with baking paper and shape with a spatula. Place in the oven, reduce the heat to 120°C and cook for 1 hour. Turn the oven off and allow the pavlova to cool completely in the oven.

1. Place strawberries, balsamic and honey in a large bowl. Toss until well coated, then set aside to marinade for 10 minutes. Add in half of the mixed berries and toss through juices.

3. To serve, spread whipped cream over the top of pavlova. Top with marinated berries and remaining mixed berries and garnish with basil leaves.

1. Combine passionfruit pulp, sugar and water in a small saucepan over medium-high heat. Simmer for 4-5 minutes or until thickened. Set aside to cool completely.

3. To serve, spread coconut cream over the top of pavlova. Top with mango slices and toasted coconut, before drizzling over passionfruit syrup and garnishing with mint.

1. Combine cherries, water, sugar, cinnamon and star anise in a small saucepan over medium-high heat. Cook, stirring occasionally, for 8-10 minutes or until syrup has thickened and cherries softened. Set aside to cool.

3. To serve, spread crème fraiche mixture over the top of pavlova. Top with cherries and drizzle over syrup, then sprinkle over chocolate shavings and hazelnuts. 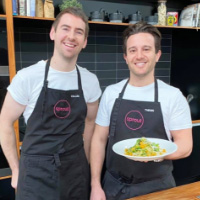